If you’re looking for a natural and effective way to support your weight loss journey, look no further than Capsiplex! Capsiplex is a fat burner that gained popularity in 2010 after some celebrities admitted to using it on television shows. Kelly Osbourne, Jennifer Lopez, Britney Spears, and Brad Pitt are among the celebrities who have endorsed Capsiplex for its ability to help with weight loss. In this article, we will explore the credibility of these celebrity endorsements and provide information on the ingredients, availability, and effectiveness of Capsiplex. 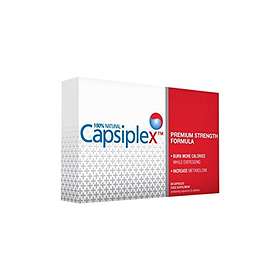 Capsiplex is a fat burning supplement produced by Bauer Nutrition. It is made in the Wolfson Berg Laboratories in Larnaca, Cyprus, with the guidance of a team of medical advisors who specialize in the development of dietary supplements. According to its official website, Capsiplex works by increasing energy expenditure, which can lead to significant weight loss. The main ingredient in Capsiplex is capsicum, also known as hot pepper. Capsiplex is marketed as a slimming capsule by Bauer Nutrition.

According to Bauer Nutrition, the use of spicy red pepper in Capsiplex can lead to increased caloric expenditure, improved metabolism, and enhanced endurance. The manufacturer claims that the unique formula of the supplement is effective at reducing fat in problem areas of the body. Taking one Capsiplex capsule per day (as opposed to several capsules for other fat burners) is sufficient to speed up thermogenesis and promote the rapid breakdown of fat cells. In addition, Capsiplex is said to increase energy levels in users.

However, to achieve these effects through the consumption of spicy red pepper, one would need to consume 10 grams daily for several weeks. Capsiplex offers a more convenient and gentle alternative, as its concentrated formula, based on Omnibead technology, allows for the efficient absorption of capsicum without causing irritation to the gastrointestinal or oral tract.

If you use Capsiplex, you can expect to burn an additional 278 calories before, during, and after physical activity. This includes an increase of 3% in calories burned before exercise, 3% during exercise, and 12 times more calories in the first 60 minutes of any sports. In addition to burning more calories, Capsiplex can also help you control your appetite, boost your metabolism, increase your energy, and significantly reduce fat.

Capsiplex is effective not only due to its main ingredient, pungent red pepper, but also because of the contributions of three other natural components. These four ingredients work together to support weight loss and contribute to the popularity of the supplement. Let’s take a closer look at the benefits of these precious ingredients:

Capsiplex contains 80mg of Capsicum Annuum, a hot red pepper extract that is rich in alkaloids like dihydrocapsaicin and capsaicin. These compounds are known for their ability to stimulate the production of hormones like norepinephrine and adrenaline, which can help to burn fat and sugar. Capsaicin is also able to transform white fat cells into brown fat cells, which are known to burn calories. This is one of the reasons why Capsicum has been chosen as the main ingredient in Capsiplex.

Several studies have demonstrated the effectiveness of red pepper in weight loss supplements. For example, a 2013 study in the United States found that participants who received 2.6 mg of capsaicinoids (hot red pepper extracts) for six days experienced an increase in energy expenditure and maintained a high metabolism without slowing down. Researchers believe that capsaicinoids like Capsicum can slightly increase the body’s thermogenic nature and boost thermogenesis, contributing to the oxidation of fat.

Each Capsiplex fat burning capsule contains 138 mg of caffeine, a stimulant that impacts the heart and nervous system. It is important to note that the recommended daily intake of caffeine for a healthy adult is 200-300 mg. Caffeine has been shown to have a lipolytic effect, which promotes the release of fat, as well as a thermogenic effect, which boosts thermogenesis and fat burning. It can also help to reduce appetite by giving a feeling of satiety and increasing concentration and alertness. In addition, caffeine has been found to reduce sensitivity to fatigue, making it easier to endure physical activity. Researchers are continuing to study the relationship between caffeine, thermogenic response, metabolism, and weight loss in women with obesity.

One of the key ingredients in Capsiplex is piperine, an alkaloid extracted from black pepper. In addition to helping lower blood sugar and bad cholesterol levels, piperine has been shown to boost the metabolism, remove white fats from storage areas, and use them as energy. In a study on rodents, those that received piperine in addition to a high-fat diet experienced increased levels of good cholesterol and decreased levels of bad cholesterol, as well as slowed fat accumulation through the activation of enzymes such as protein lipase.

Capsiplex contains 16mg of vitamin B3, also known as niacin, per capsule. In addition to its ability to regulate blood sugar and bad cholesterol levels, niacin also has an anti-inflammatory effect on fat tissue. This vitamin helps to release energy from fats, proteins, and carbohydrates, allowing the body to use this energy more efficiently.

How to Take Capsiplex?

Capsiplex has tremendous effects in the body. Read some of its major benefits below.

The use of Capsiplex can help stimulate the body’s metabolism and burn fat through the process of thermogenesis. This occurs due to the presence of capsaicin and caffeine in the supplement, which helps increase the body’s internal heat. The process of lipolysis, or fat burning, is activated in order to provide the body with energy for physical activity. This process is aided by the use of brown fat, which is found in adult men and women and stored in various parts of the body. Capsiplex can help burn both brown and white fat, particularly in areas like the abdomen, hips, and thighs, to create energy for the body.

Capsaicin, an active ingredient in Capsiplex, has been shown by research to act as a natural appetite suppressant. A study conducted at Laval University in Quebec found that capsaicin activates feelings of satiety in the brain through its interaction with a molecule in the body called hypothalamus. The technology used in Capsiplex, called Omnibead, allows for the absorption of capsaicin without causing irritation to the oral cavity or esophagus. This can help reduce cravings and lead to healthier eating habits in the long term. Even after discontinuing use of the supplement, individuals may not experience the weight gain often associated with “yo-yo” dieting due to their improved eating habits.

Capsiplex has seen great success, with many satisfied customers reporting significant weight loss. However, it is important to note that the supplement may not work for everyone. Some customers, like Eglantine, have lost significant amounts of weight, while others, like Agathe, have not seen the desired results. It is important to carefully follow the instructions and use the supplement for a reasonable period of time to see if it is effective. It is also important to consider that individual experiences and results may vary.

While Capsiplex is made from natural ingredients, it is not necessarily safe for everyone. Some people may be allergic to one of the natural components, such as capsaicin. This can cause gastric reflux, burns, and stomach irritation. Additionally, some people may have a sensitivity or even an overdose reaction to the caffeine in the supplement, which can cause moodiness, irritability, increased heart rate, insomnia, and dizziness. In rare cases, it may also cause panic attacks after intense physical activity. If you are currently taking medication, it is recommended to avoid taking Capsiplex. It is always best to consult with a doctor before taking any dietary supplement.

Dosage and Advice of Use:

Capsiplex should be taken once daily, preferably in the morning with a glass of water. It is not recommended to take it in the afternoon or at bedtime due to its caffeine content. For best results, it is recommended to follow a course of 2-3 months for a goal of 8-10 kilograms of weight loss, or 6 months for a goal of 12-15 kilograms of weight loss, with a break of one month in the middle. To maximize the effectiveness of the supplement, it is advised to combine it with a healthy, balanced diet and regular physical activity such as walking, dancing, cycling, and swimming. It is important to keep the capsules out of reach of children and to consult a doctor before taking them if you are taking medication.

Where to Buy Capsiplex?

Capsiplex is not available in physical pharmacies outside the United Kingdom and United States. It can only be purchased through the official website of Bauer Nutrition.

Zaineb Fatima holds a BSc (Hons) degree in Food and Nutrition, and is dedicated to helping others maintain a healthy weight through the use of good supplements. In addition to consuming these supplements herself, she also shares her knowledge about their usage with others. Zaineb is also an expert on a range of health topics, and is happy to share her opinions and insights on matters related to food, health, and nutrition.